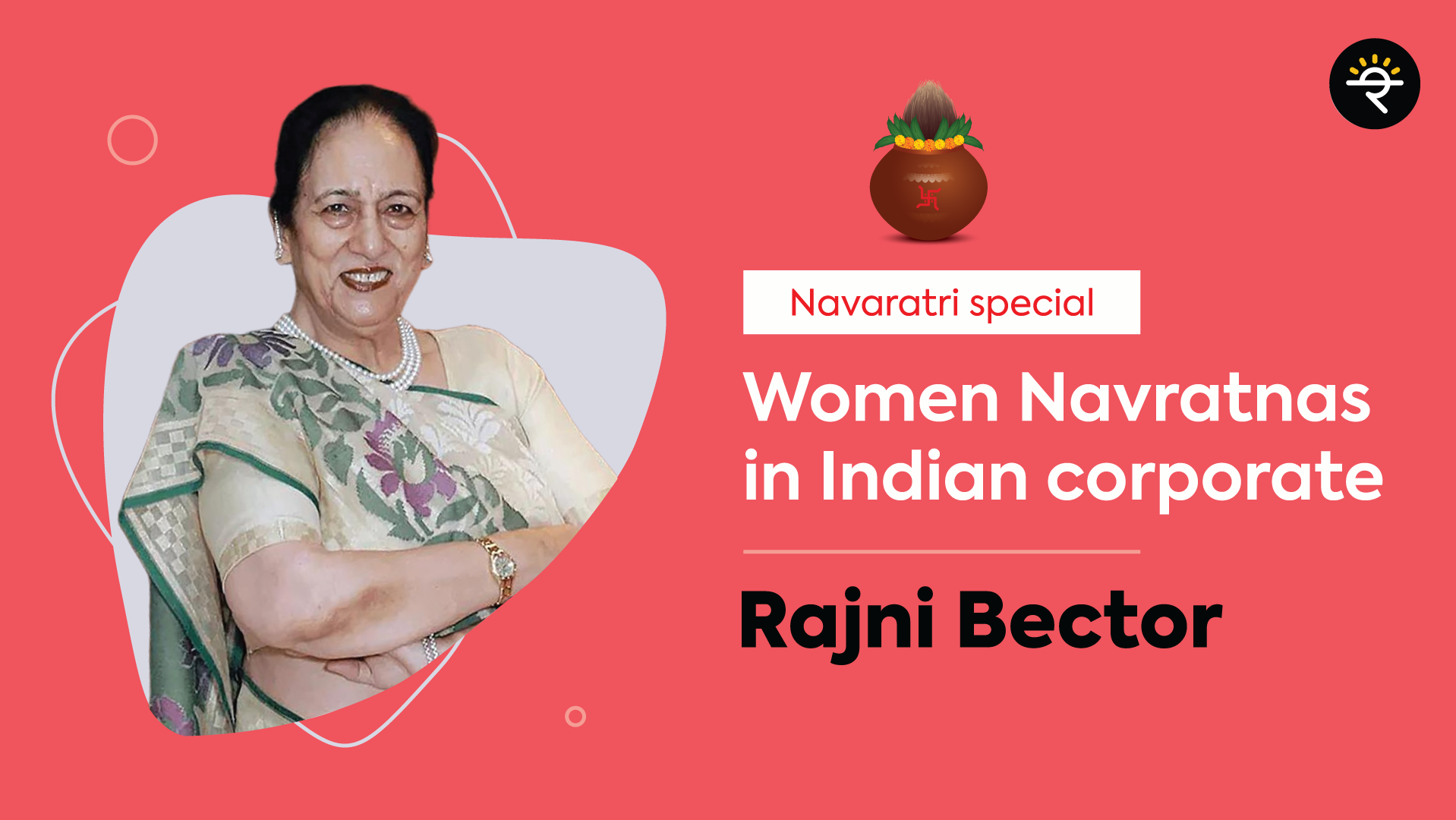 Once there was a little girl. She got married at a young age and moved from a broad-minded family to a small-town conservative family. She was fond of cooking and impressed everyone around with her food taste. She dreamed to make it big but faced opposition from her in-laws. A very supportive but broke husband, who had lost his fortune in business joined her dream. They both together made it happen and lived happily ever after.

Welcome back to our series Women Navratnas in Indian Corporate. The story you read is not from a movie but a real-life story of our second ratna who started from her kitchen and made it to Rs. 2,000 Cr. enterprise. We are talking about Mrs. Rajni Bector.

Mrs. Bector was born in Karachi in 1940 and grew up in Lahore. After the partition, their families shifted to Delhi. She got married at a young age when she was still studying and had to shift to Ludhiana a small backward city as compared to Delhi. Her husband was a businessman and her in-laws were conservative and did not approve of a woman working. Mrs. Bector was very fond of cooking and hosting guests. She was a fantastic host and the guests would not stop praising her. Of those who praised her were Brijmohan Munjal of Hero Motocorp and the Pahwas of Avon cycles.

In the late 1970s, she once set up her small stall of ice cream in a local funfair next to Kwality. And guess what, people liked her ice cream more than Kwality’s. In the next few years, her ice cream started receiving a good local demand. It was when her husband insisted, she sells the product under a brand name. As cream was used in the majority of her products, they named it Cremica (Cream-ka). Later she moved to Bakery products, but the name stuck.

Post liberalization when McDonald’s entered Indian markets, they went all over India scouting for suppliers for their buns. After several strict trials, they selected Cremica. Soon McDonald’s introduced Mrs. Bector to Chicago-based Quaker Oats, with whom they entered into a JV to manufacture sauces (Ketchup and Mayo). The company is still the sole supplier of burger buns and pan muffins for Connaught Plaza Restaurants Pvt. Ltd. (who manages McDonald’s in North and East India) and is also the preferred supplier for Hardcastle Restaurants Pvt. Ltd. They export to 64 countries supplying to reputed retail chains like Walmart, Dollarama, etc. They are also into contract manufacturing of biscuits for Oreos and Chocobakes. Cremica is also the largest supplier of biscuits to the Canteen Stores Department of the Ministry of Defence and an approved and listed supplier of Indian Railways with a strong presence in North India. Wow! That is a long list of ventures for someone who started from her kitchen.

There are some stories you just fall in love with. This was the story of our second ratna from the Navaratri special series “Women Navratna’s” – Mrs. Rajni Bector, founder of Cremica Food Industries Ltd. – which is an inspiration to all those women who are working against all the hurdles to succeed in their lives.